RetroLink:  10 Historic Places in Orlando to Get a Drink – Places 6 through 10

#5 – Parliament House – Yelp (1960’s motor lodge and one of the oldest gay resorts and entertainment complexes in the U.S.)

If you’ve ever driven down Orange Blossom Trail, you know the iconic neon sign.  But you may not realize the Parliament House was once part of a chain of motor inns with locations in other cities including Cocoa Beach, FL and Birmingham, AL.

When the Orlando site opened in the 1960’s, the area was a destination for tourists seeking a warm escape from winter weather and visiting Florida east or west coast beaches.

A 1962 New York Times article about Orlando’s growing appeal as a resort town noted the opening of the new 120 room Parliament House.  The Times reported that Central Florida visitors were enjoying rockets and “other paraphernalia of the Space Age” at the Martin Marietta plant tour and the city’s “new showplace,” Colonial Plaza, the largest shopping destination in the Southeast.

Since 1975, Parliament House has operated as a gay resort and entertainment complex.  And has stood the test of time.  The gay community it serves changed drastically since the seventies and the surrounding area no longer attracts tourists.

From the back of the postcard:  “National Headquarters of Minute Maid Corporation in Orlando, FLa.  Located near the heart of Florida’s rolling citrus grove country, at the intersection of 441 and Rte. 50, this beautiful building is the center of all operations of Minute Maid, world’s largest grower and processor of citrus products — Minute Maid and Snow Crop frozen concentrates, and Hi-C canned fruit drinks.”

This history of Minute Maid goes back to World War II, when research created a new method to concentrate orange juice.  The US Army awarded a contract to a new company, Florida Foods, to provide an orange powder that could be reconstituted into juice.  The war ended before the product made it to the troops, so Florida Foods turned to the consumer market.   Florida Foods became Vacuum Foods and later renamed Minute Maid Corporation.

Minute Maid’s headquarters were built at the corner of OBT and Colonial in the mid-50’s.   Coca-Cola purchased Minute Maid in 1960 for its first venture outside sodas.   In 1967, Coca-Cola moved the headquarters to Houston, TX.

Having been used by Orange County Public Schools in recent years, today the building sits empty.  Plans are currently underway to locate a Wawa convenience store on this site. 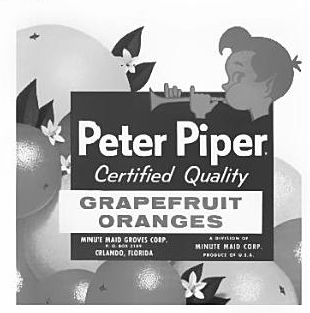