Three Retro Orlando Icons That Are No More

To start a new series of 2016 posts here is a look at recent historic sites that are now memories.  Orlando Retro Blog has shared the history of this town since 2013 and in that time, three locations covered have met the bulldozer.

(Original Post) This corner of Orange Blossom Trail and Colonial Drive was once the site of the headquarters for Minute Maid juices.  Now part of Coca-Cola, Minute Maid long ago left its OBT home.

Like many lots past their prime in Central Florida, the building was torn down and Wawa sprouted up.  Today you can buy a Minute Maid drink right on the spot where the whole Minute Maid company once operated.

(Original Post) The Round Building (American Federal Savings and Loan Association building) was already slated to be a goner when its story was  told here in May 2013.  Constructed with only two stories in the early 1960’s, the bank building later grew floors and became a small office tower.  In 1993,  The Round Building had a brief cameo appearance in Lethal Weapon 3.

The bris de soleil panels surrounding the structure were carefully removed three years ago, and The Round Building was demolished.  The site is now part of the lawn leading into the Dr. Phillips Center for the Performing Arts. 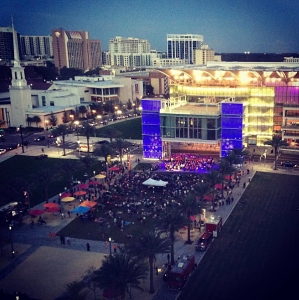 A clear view without The Round Building (Source: Instagram @mattpeacock78)

(Original Post) Tinker Field was the most significant historical loss in recent years.  Not only was Tinker Field a reminder that years ago Orlando was a baseball town, but it also played a role in the civil rights movement.  When Martin Luther King, Jr visited Orlando in 1963, he gave a speech on the field.  At the time, the Minnesota Twins held spring training here and was controversially the last major league team to not provide their players with racially integrated accommodations. (Retro Link)

Tinker Field was removed to make room for Orlando Citrus Bowl renovations.  The City has plans to add a memorial to recognize the site’s history.

RetroLink:  10 Historic Places in Orlando to Get a Drink – Places 6 through 10

#5 – Parliament House – Yelp (1960’s motor lodge and one of the oldest gay resorts and entertainment complexes in the U.S.)

If you’ve ever driven down Orange Blossom Trail, you know the iconic neon sign.  But you may not realize the Parliament House was once part of a chain of motor inns with locations in other cities including Cocoa Beach, FL and Birmingham, AL.

When the Orlando site opened in the 1960’s, the area was a destination for tourists seeking a warm escape from winter weather and visiting Florida east or west coast beaches.

A 1962 New York Times article about Orlando’s growing appeal as a resort town noted the opening of the new 120 room Parliament House.  The Times reported that Central Florida visitors were enjoying rockets and “other paraphernalia of the Space Age” at the Martin Marietta plant tour and the city’s “new showplace,” Colonial Plaza, the largest shopping destination in the Southeast.

Since 1975, Parliament House has operated as a gay resort and entertainment complex.  And has stood the test of time.  The gay community it serves changed drastically since the seventies and the surrounding area no longer attracts tourists.

10 Historic Places in Orlando to Get a Drink (Part 1)

Many of the remaining historic buildings in Downtown Orlando have been repurposed into bars and restaurants.   This is the first half of a list of 10 bars, restaurants, or lounges where you can enjoy a drink and connect to Orlando’s past.

Looking into to Hanson’s Shoe Repair from its outdoor patio

Call ahead for a password before visiting.  The theme of this speakeasy is rooted in true-life Orlando history.  Andrew Hansen moved to Orlando from Pittsburgh in 1890 and opened Hansen Shoe Repair Shop at 27 East Pine Street.  This address is now one of the oldest brick buildings in Orlando and Hansen’s was the first business to have an electric sign.

Empire Hotel with electric elevators. Ember is at ground level on the west side of the building.

Ember is located in what was one the Empire Hotel.  Built in 1913 by businessman, James MacGruder, it was advertised as, “Orlando’s Most Popular Medium Priced Hotel” and boasted an electric elevator.  The amenities in its 100 rooms included baths with hot and cold water in each room.

Underground in the Stardust Lounge

The Stardust Lounge sits underground below Post Parkside Apartments.  It has a unique hip 60’s Vegas theme in this low ceiling basement bar.  The significance of this spot occurred upstairs about 50 years prior.  The apartment complex was once the Cherry Plaza Hotel, and the scene of presidential visits from LBJ and Walt Disney’s only public appearance in Orlando.   (Orlando Retro story)

Joseph Bumby was one of Orlando’s pioneers having moved here from England in 1873.  After arriving he farmed his 160 acres of orange groves east of downtown, carried mail by horseback from Sanford, and built a warehouse on Church Street.  The warehouse sold fertilizer and hay and was the first place to buy train tickets before the railroad depot was built.

Bumby Hardware was operated by the Bumby family for about 80 years.

In 1886, Mr. Bumby completed his two-story brick hardware store across the street from his warehouse.  The business was an institution in this town with its slogan, “If you can’t find it — go to Bumby’s”.  The Bumby family ran the store at this location until it closed in 1966.

Mr. Bumby’s store today is home of Hamburger Mary’s.  Today you can enjoy a cabaret show or play drag queen bingo in the same storefront where 120 years ago one would have purchased supplies to mend a fence.

The burger and sport bar chain, Harry Buffalo, opened their Orlando location in a spot one could argue has had a couple of previous lives.   In 1924, businessman William Slemon moved his dry goods store into this new brick building.  Here he sold overalls, mens pants, towels, and table linens.   A hotel operated on the upper floors.  After Slemon’s closed, Goodwill’s first Central Florida location operated here in the 1960’s.

It gained new life in 1974 when Bob Snow opened Rosie O’Grady’s Goodtime Emporium.  It was the cornerstone for Church Street Station, an entertainment complex that became one of Florida’s top tourist attraction through the 70’s and 80’s.

Check back for part two of the 10 Historic Places in Orlando to Get a Drink list. 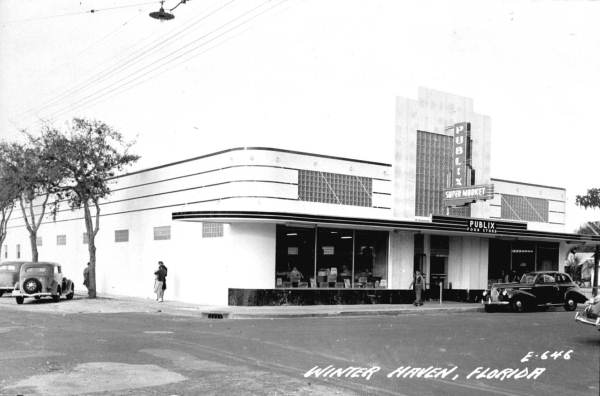 The first Publix Supermarket in Winter Haven, FL. Similar stylings can be seen on the Orlando buildings listed below.

Shopping has been a pleasure at Publix for Orlando residents since the 30’s. George Jenkins started his company in nearby Winter Haven in 1930.  Despite the depression, his stores were successful businesses and Publix quickly grew throughout Central Florida.  In 1940, he created Florida’s first supermarket.  As described on Publix’s website, it was a “‘food palace’ of marble, glass and stucco, and equipped it with innovations never seen before in a grocery store. Air conditioning. Fluorescent lighting. Electric-eye doors. Frozen food cases. Piped-in music. Eight-foot-wide aisles. Open dairy cases designed to Mr. George’s specifications. In-store donut and flower shops. People traveled from miles to shop there, and Publix prospered.”

Today there are over 1000 Publix locations and dozens within Orlando.   As new locations are added, the old buildings are sometimes left behind.   The Publix in College Park has operated on the same site (though the building has been updated) for about 60 years, but most of the old Publix buildings have been torn down or repurposed.

Now a popular brunch spot, this building was constructed in 1936 and the first Publix in the area.

Once the site of a large Publix Supermarket, today this Orange Blossom Trail building is a dry cleaner.

A local icon in itself as a photo and hobby shop in what was once a Publix Supermarket.

An Orlando Publix ad from the 1947 Morning Sentinel
Bacon at 56 cents a pound!